~How Many More Black Lives Have To Be lost Before We Do Something?~


First thing that needs to be noted is that we just had another police shooting of an unarmed man in Austin, Texas on Thursday night.. This happened after the report was compiled, so add another name to this grisly toll..

Second, folks have got to understand this is not coincident, it’s quite deliberate. Police have moved from a point of trying to de-escalate or prevention to a shoot first ask questions later policy..

African American teenager’s killing by police puts Missouri city on edge after another night of protests
Michael Brown was on the right path, according to his family and friends. Studying did not come easily, but the 18-year-old worked hard at Normandy high school and graduated in May. Mike had been due to start classes atVatterott College last Monday. He was excited to enter the world of business.”This is a boy who did everything right,” said Cornell Brooks, the president of the National Association for the Advancement of Colored People, “who never got into a fight, who stayed in school.”

While some boys would get into edgy scrapes, Mike, a “gentle giant”, wasn’t interested, said Chris McMillan, a 20-year-old childhood friend who grew up playing PlayStation with Brown.

“He was a cool person,” said McMillan. “He was laidback and respectful. None of that nonsense. None of the crews and gangs. We’d just play games, chill, and ride around.” 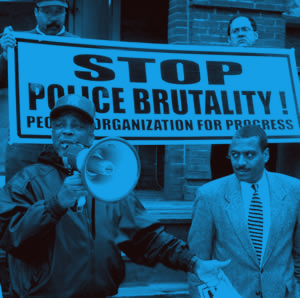 The list below are just noting the deaths at hands of the police, its not highlighting the enormous amounts of brutality and outright disrespect many in the Black community have to endure on a daily basis.. The report below is to say the least disturbing and underscores a low wage war going on in our communities…

Twenty-eight Black People (27 Men and 1 Female) Killed by Police Officials, Security
Guards, and Self-Appointed “Keepers of the Peace” between January 1, 2012 and March
31, 2012

– 28 cases of state sanctioned or justified murder of Black people in the first 3
months of 2012 alone have been found (due to under reporting and discriminatory
methods of documentation, it is likely that there are more that our research has yet
to uncover)

– Of the 28 killed people, 18 were definitely unarmed. 2 probably had firearms, 8
were alleged to have non-lethal weapons.

. 11 were innocent of any illegal behavior or behavior that involved a
threat to anyone (although the shooters claimed they looked “suspicious”);

. The remaining 10 were either engaged in illegal or potentially illegal
activity, or there was too little info to determine circumstances of their
killing. It appears that in all but two of these cases, illegal and/or harmful
behavior could have been stopped without the use of lethal force. 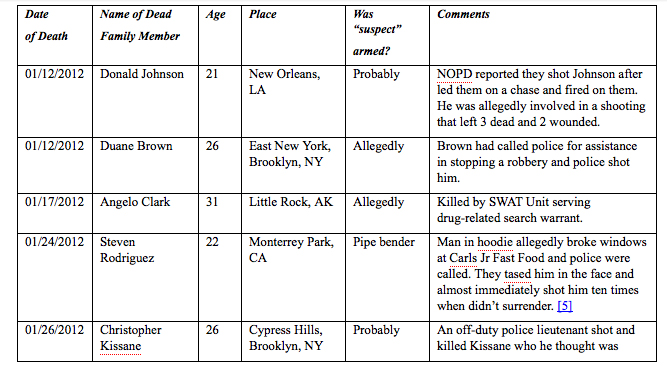 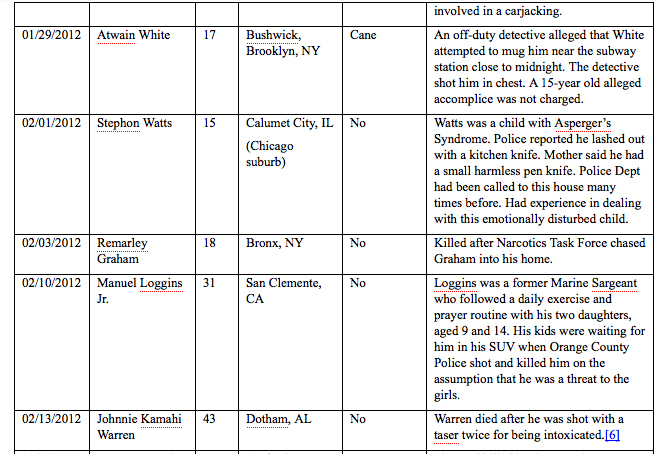 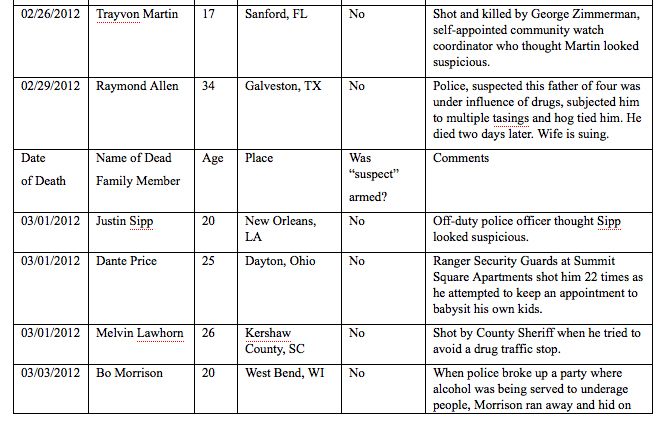 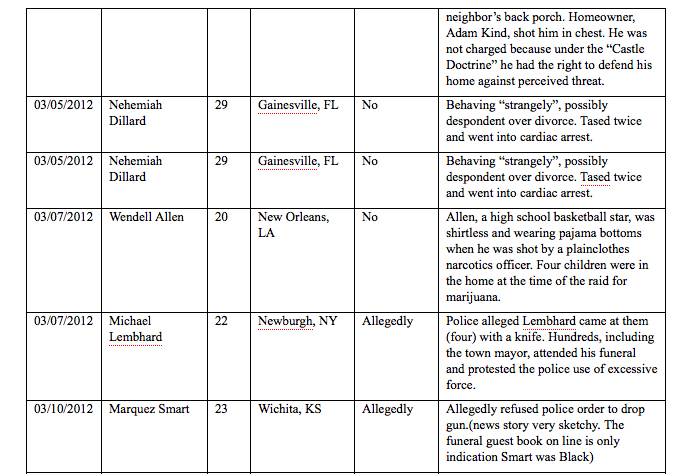 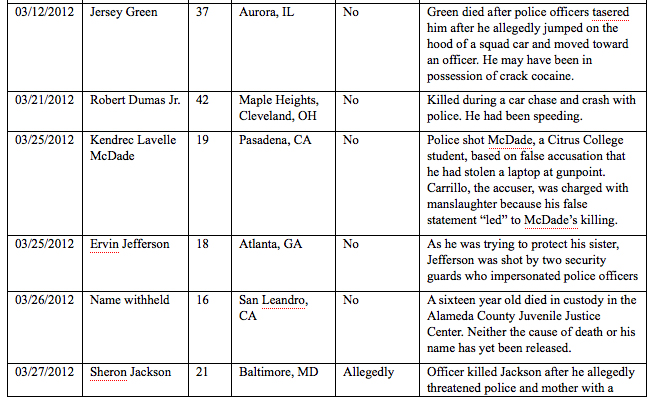 [5] News One.com reported Rodriguez was African America however other reports and family

photos indicate he was Latino.

[6] Many written reports do not explicitly identify the race of the victim. Most, however, do show

photographs. In the case of Warren, no photo was displayed.

Police officers, security guards, or self-appointed vigilantes extrajudicially killed at least 313 African-Americans in 2012, according to a recent study. This means a black person was killed by a security officer every 28 hours. The report notes that it’s possible that the real number could be much higher.

The report, entitled “Operation Ghetto Storm,” was conducted by the Malcolm X Grassroots Movement, an antiracist grassroots activist organization. The organization has chapters in Atlanta, Detroit, Fort Worth-Dallas, Jackson, New Orleans, New York City, Oakland, and Washington, D.C. It has a history of organizing campaigns against police brutality and state repression in black and brown communities. Their study’s sources included police and media reports along with other publicly available information. Last year, the organization published a similar study showing that a black person is killed by security forces every 36 hours. However, this study did not tell the whole story, as it only looked at shootings from January to June 2012. Their latest study is an update of this.

These killings come on top of other forms of oppression black people face. Mass incarceration of nonwhites is one of them. While African-Americans constitute 13.1% of the nation’s population, they make up nearly 40% of the prison population. Even though African-Americans use or sell drugs about the same rate as whites, they are 2.8 to 5.5 times more likely to be arrested for drugs than whites. Black offenders also receive longer sentences compared to whites. Most offenders are in prison for nonviolent drug offenses.

“Operation Ghetto Storm” explains why such killings occur so often. Current practices of institutional racism have roots in the enslavement of black Africans, whose labor was exploited to build the American capitalist economy, and the genocide of Native Americans. The report points out that in order to maintain the systems of racism, colonialism, and capitalist exploitation, the United States maintains a network of “repressive enforcement structures.” These structures include the police, FBI, Homeland Security, CIA, Secret Service, prisons, and private security companies, along with mass surveillance and mass incarceration.

The Malcolm X Grassroots Movement is not the only group challenging police violence against African-Americans. The Stop Mass Incarceration Network has been challenging the policy of stop-and-frisk in New York City, in which police officers randomly stop and search individuals for weapons or contraband. African-American and Latino men are disproportionately stopped and harassed by police officers. Most of those stopped (close to 90%) are innocent, according to the New York Civil Liberties Union. Stop Mass Incarceration alsoorganizes against the War on Drugs and inhumane treatment of prisoners.

A significant portion of those killed, 68 people or 22%, suffered from mental health issues and/or were self-medicated. The study says that “[m]any of them might be alive today if community members trained and committed to humane crisis intervention and mental health treatment had been called, rather than the police.”

43% of the shootings occurred after an incident of racial profiling. This means police saw a person who looked or behaved “suspiciously” largely because of their skin color and attempted to detain the suspect before killing them. Other times, the shootings occurred during a criminal investigation (24%), after 9-1-1 calls from “emotionally disturbed loved ones” (19%) or because of domestic violence (7%), or innocent people were killed for no reason (7%).

Most of the people killed were not armed. According to the report, 136 people or 44%, had no weapon at all the time they were killed by police officers. Another 27% were deaths in which police claimed the suspect had a gun but there was no corroboration to prove this. In addition, 6 people (2%) were alleged to have possessed knives or similar tools. Those who did, in fact, possess guns or knives were 20% (62 people) and 7% (23 people) of the study, respectively.

The report digs into how police justify their shootings. Most police officers, security guards, or vigilantes who extrajudicially killed black people, about 47% (146 of 313), claimed they “felt threatened”, “feared for their life”, or “were forced to shoot to protect themselves or others”. George Zimmerman, the armed self-appointed neighborhood watchman who killed Trayvon Martin last year, claimed exactly this to justify shooting Martin. Other justifications include suspects fleeing (14%), allegedly driving cars toward officers, allegedly reaching for waistbands or lunging, or allegedly pointing a gun at an officer. Only 13% or 42 people fired a weapon “before or during the officer’s arrival”.

Police recruitment, training, policies, and overall racism within society conditions police (and many other people) to assume black people are violent to begin with. This leads to police overacting in situations involving African-American suspects. It also explains why so many police claimed the black suspect “looked suspicious” or “thought they had a gun.” Johannes Mehserle, the white BART police officer who shot and killed 22-year-old Oscar Grant in January 2009, claimed Grant had a gun, even though Grant was subdued to the ground by other officers.

Of the 313 killings, the report found that 275 of them or 88% were cases of excessive force. Only 8% were not considered excessive as they involved cases were suspects shot at, wounded, or killed a police and/or others. Additionally, 4% were situations were the facts surrounding the killing were “unclear or sparsely reported”. The vast majority of the time, police officers, security guards, or armed vigilantes who extrajudicially kill black people escape accountability.

Over the past 70 years, the “repressive enforcement structures” described in the report have been used to “wage a grand strategy of ‘domestic’ pacification” to maintain the system through endless “containment campaigns” amounting to “perpetual war”. According to the report, this perpetual war has been called multiple names — the “Cold War”, COINTELPRO, the “War on Drugs, the “War on Gangs”, the “War on Crime”, and now the “War on Terrorism”. This pacification strategy is designed to subjugate oppressed populations and stifle political resistance. In other words, they are wars against domestic marginalized groups. “Extrajudicial killings”, says the report, “are clearly an indispensable tool in the United States government’s pacification pursuits.” It attributes the preponderance of these killings to institutionalized racism and policies within police departments.

Paramilitary police units, known as SWAT (Special Weapons and Tactics) teams, developed in order to quell black riots in major cities, such as Los Angeles and Detroit, during the 1960s and ’70s. SWAT teams had major shootouts with militant black and left-wing groups, such as the Black Panther Party and Symbionese Liberation Army (SLA) in 1969 and 1974, respectively. SWAT teams were only used for high-risk situations, until the War on Drugs began in the 1980s. Now they’re used in raids — a common military tactic — of suspected drugor non-drug offenders’ homes.

The War on Drugs, first declared by President Richard Nixon in 1971, was largely a product of U.S. covert operations. Anti-communist counter-revolutionaries, known as the “Contras”, were trained, funded, and largely created by the CIA to overthrow the leftist Sandinista government of Nicaragua during the 1980s. However, the CIA’s funding was not enough. Desperate for money, the Contras needed other funding sources to fight their war against the Sandinistas. The additional dollars came from the drug trade. The late investigative journalist Gary Webb, in 1996, wrote a lengthy series of articles for the San Jose Mercury News, entitled “Dark Alliance,” detailing how the Contras smuggled cocaine from South America to California’s inner cities and used the profits to fund their fight against the Sandinista government. The CIA knew about this but turned a blind eye. The report received a lot of controversy, criticism, and tarnishing of Webb’s journalistic career, which would lead him to commit suicide in 2004. However, subsequent reports from Congressional hearings and other journalists corroborated Webb’s findings. 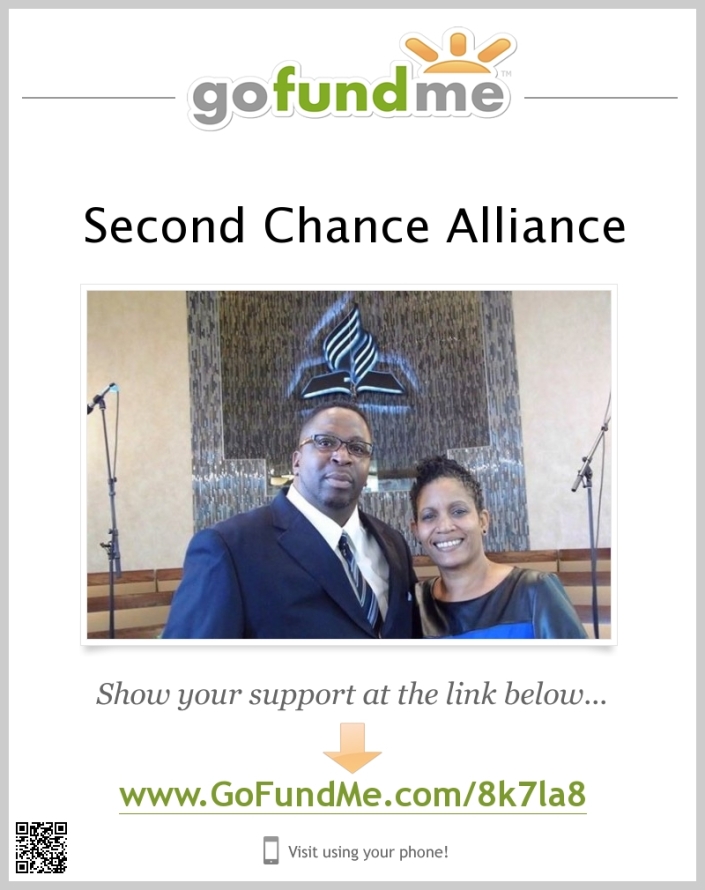