Larry Smith jail in Banning from Highway 243 in Banning on April 23, 2013. Over the next five years, virtually every cent of new revenue flowing into Riverside County coffers will go to building and staffing jails and boosting deputy patrols in unincorporated areas.

Adding jail beds and boosting deputy patrols in Riverside County could eat up projected gains in revenue over the next few years, leaving little or nothing to restore code enforcement, animal control and other departments hit hard by the economic downturn.

Jail expansions could potentially max out the county’s self-imposed limit on debt payments by 2020, according to a recent analysis. Even then, the county likely can’t erase its jail bed shortage without going well beyond the limit.

The Board of Supervisors last month held a workshop on budget-related matters, including a five-year spending plan for jails and a plan to hire more deputies for unincorporated areas. The board voted to hire a consultant to further assess the jail crunch, and supervisors want a closer look at non-jail options, such as road crews and fire camps for low-level offenders.

After losing $215 million in tax revenue since 2007, county finances are starting to modestly perk up, and property tax revenue is expected to grow as the real estate market rebounds. But as more money comes in, the county faces massive new spending obligations, jails being the largest.

Jail crowding has been a problem for years. Since 2000, the county’s population grew 45 percent while the number of jail beds grew just 31 percent, according to a county staff report. A long-standing federal court order requires the county to release inmates early when there aren’t enough beds.

Under court pressure to shrink California’s prison population and relieve crowding, state lawmakers in 2011 passed public safety realignment, which shifted to counties the responsibility for inmates convicted of nonviolent, nonserious and non-high risk sexual offenses. Those offenders are now sent to jails instead of state prison.

“Because of what the state has done, we will need to distort what would otherwise be our county priorities in order to do what must be done, which is to build jails to house people that used to be in prison,” county Chief Financial Officer Ed Corser told supervisors during the Sept. 23 workshop.

To curtail early releases, the county plans to add more than 1,200 beds to the 353-bed Indio jail by 2017. The $267 million project – a state grant covers $100 million – doesn’t include the cost of moving county offices to accommodate the expansion.

The county is applying for another $80 million in state funding to add as many as 582 beds to the 1,520-bed Larry D. Smith Correctional Facility in Banning. Officials see potential there for a total of 1,600 additional beds.

Grants don’t cover the cost of running bigger jails. The new Indio jail, called the East County Detention Center, will require 406 sheriff’s personnel to be hired at a cost of $37.9 million annually by 2017, according to Corser’s figures.

In all, supervisors have committed to $97.5 million in new, annual public safety expenses by 2017, Corser’s numbers show. He expects revenue growth to cover the new costs.

But the $97.5 million doesn’t include higher labor costs that could come when the sheriffs’ union contract expires in 2016.

And it doesn’t address potential new funding requests from the district attorney’s office, the public defender, the Fire Department and probation. The county also is trying to boost its rainy day fund from $140 million, an amount described by one bond rating agency as “barely satisfactory,” Corser said.

Altogether, those additional requests could add up to $118 million by 2017, Corser said. Of that, $91.3 million would have to be found somewhere.

Prop. 172 passed in 1993 created a special public safety sales tax. But Corser said any growth in Prop. 172 revenue should go to the Indio expansion.

The Sheriff’s Department estimates the county needs 4,000 new jail beds now and 10,000 by 2028. Adding to Indio and Larry Smith would still leave the county short of that long-term goal.

Plans for a “hub jail” outside Palm Springs – 2,000 beds in phase one, 7,200 at buildout – have been discussed for years, and the county spent more than $22 million preparing for the project. But supervisors shelved the hub jail in 2011 amid cost concerns and opposition from Coachella Valley residents, who worried a jail seen from Interstate 10 would hurt the area’s image.

Even if supervisors revived the hub jail, a county staff analysis casts doubt on the ability to pay for it in the short term.

County policy dictates that no more than 7 percent of general fund spending go to paying off construction debt, a ratio meant to appease rating agencies that grade the county’s credit-worthiness. Adding 1,600 beds to Larry Smith brings the county to that threshold by 2020, the analysis shows.

Deputy County Executive Officer Christopher Hans, who presented the analysis to supervisors, noted the projections are less accurate the farther they go out. 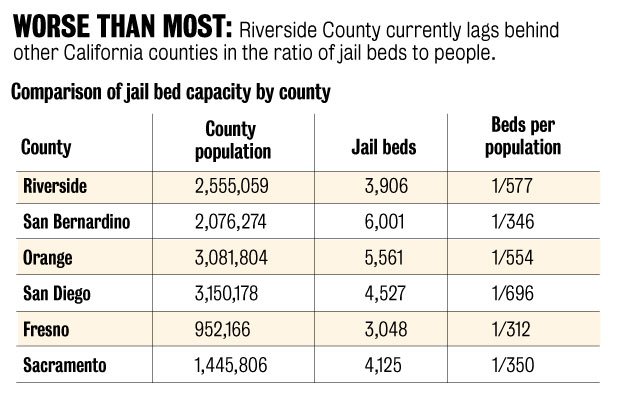 But assuming the numbers are true, there’s practically no room in the general fund – the county’s main piggy bank – for non-jail construction projects.

In the past, the county could use redevelopment money to pay for new infrastructure. But that option vanished in 2011 when the courts upheld the abolishment of California redevelopment agencies.

The Riverside County Transportation Commission, a multi-jurisdictional agency, does have its own funding for transportation infrastructure. It’s also possible to pay for construction through developer impact fees, state and federal money and other sources.

Right now, 20 percent of the county’s $590 million in discretionary general fund revenue goes to corrections. Jail spending would make up more than 40 percent if 1,600 beds are added to Larry Smith and more than 80 percent if a 6,000-bed jail is also built.

The five supervisors committed in April to improving the ratio of deputies to residents in the county’s unincorporated areas, which aren’t part of cities. The ratio stood at 1.2 deputies per 1,000 residents before the recession and fell to 0.75 per 1,000 in 2012. It should rise to 1 per 1,000 by the end of 2013.

To reach 1.2 per 1,000, Corser said the sheriff would have to add 148 deputies by 2018 at an annual cost of $21.4 million. Actual costs could vary depending on how long it takes to screen and train new hires.

During the workshop, Supervisor John Tavaglione questioned whether the 1.2 ratio is feasible. During tough times in prior years, budgets for the animal control and code enforcement departments were slashed, and supervisors had to restore them, he said.

“Now we’ve obliterated those departments,” Tavaglione said. “And we’re going to have to rebuild them again.”

Public safety departments have seen their budgets cut 3 percent in recent years, but other departments took hits of at least 15 to 19 percent, Corser said. Factoring in non-county funding, code enforcement and animal control budgets since 2007 have dropped 33 and 18 percent, respectively.

In September 2007, supervisors beefed up code enforcement staffing in the unincorporated areas to 90 officers and supervising staff, up from 40 the year before. The number is 44 now.

Tavaglione stressed he supports the Sheriff’s Department and said he would love to see a 1.2 ratio.

However, “To think that we can just, for the next five years, focus every single dollar that we have on only the Sheriff’s Department and nothing else … that we’re not going to be able to provide the other services necessary in our communities to support, that go along with sheriff … it’s ridiculous,” he said.

Supervisor Marion Ashley said without a safe environment, the county won’t realize the economic growth it is expecting. 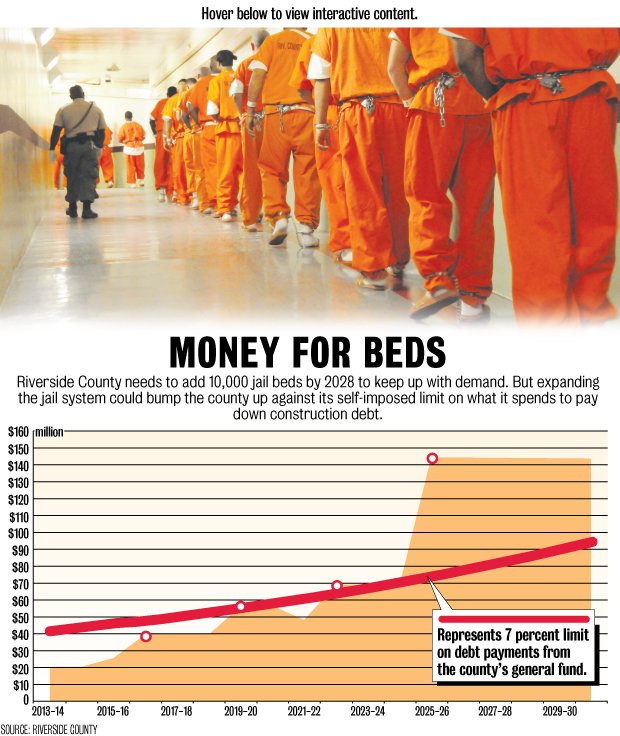 However, he said more prosecutors will be needed as more deputies arrest lawbreakers. Van Wagenen estimates the office is down 15 to 20 lawyers compared to four years ago. In recent years, the office has sought grants and outside funding to offset expenses, he added.

The county also is bracing for possible holes in this year’s budget. The Sheriff’s Department could have a $20 million shortfall and Riverside County Regional Medical Center is looking at a $50 million gap when the fiscal year ends next June, Corser said.

“There’s a price for public safety,” he said.

Alternative sentencing Re-Entry programs like Second Chance Alliance for Riverside County will increase public safety and generate revenues for the various community it will serve. Click the insignia to view our vision.