~Honor In God Verses The World’s Version of Honor~

It was my duty to shoot the enemy, and I don’t regret it. My regrets are for the people I couldn’t save: Marines, soldiers, buddies. I’m not naive, and I don’t romanticize war. The worst moments of my life have come as a SEAL. But I can stand before God with a clear conscience about doing my job.

This is the day that the Lord has made and also a day that we who served in the United States Military Armed Forces were honored at Kansas Avenue SDA Church for our service and dedication to our country. Today was a day that I watched along with many others, my husband Chief Petty Officer Aaron Dejohn Pratt be honored with a standing ovation from the entire congregation for his service as a Navy SEAL, a POW and as a Mighty Man of God. I can truly say that I have never been as proud as I was today to see the love and respect of others who never knew that Aaron was “more” than a Man of God, but also a dedicated soldier who served his country with all that he had, even as a POW.

I would like to thank Colonel Bill Howe for including me and my husband in today’s celebration of freedom and liberty, and for his steadfastness in honoring my husband as a Navy SEAL. 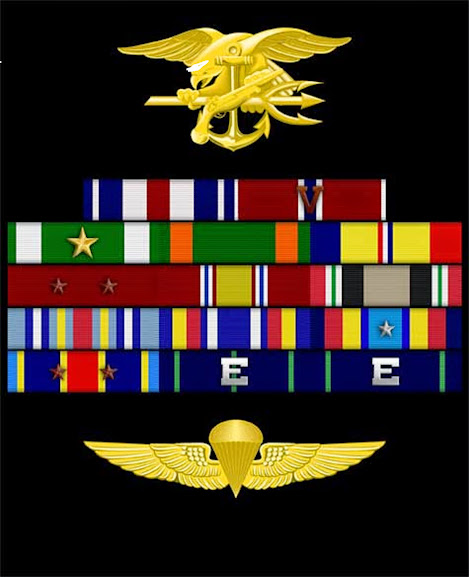 Loyalty to Country, Team and Teammate
• Serve with Honor and Integrity On and Off the Battlefield
• Ready to Lead, Ready to Follow, Never Quit
• Take responsibility for your actions and the actions of your teammates
• Excel as Warriors through Discipline and Innovation
• Train for War, Fight to Win, Defeat our Nation’s Enemies
• Earn your Trident everyday

May and I are always excited about going to the house of worship on Sunday, Saturday or mid week. We are doubly honored when Crown of Life Ministries and Pastor Jones and his wife Sandra allow us to be incorporated within the functions of that church as well. We have been in hot pursuit of opening our dream business “Second Chance Alliance” and in performing the work required we have been side by side with several City and State officials, but never the chief of Police of Riverside County and two Councilmen of 7th District and 2nd District of Riverside. May was throw a back for real when she was given the opportunity to take this photo with one of the original Tuskegee Airmen.

Sometimes a little book can make a big difference in how people think about right and wrong.

Dunant’s book is rarely read today. But if you are outraged when bombs, rockets, or artillery shells fall on hospitals, schools, and places of worship, you can trace that presumption—that these should be safe places—to Dunant.

Across cultures and time, honor and manliness have been inextricably tied together. In many cases, they were synonymous. Honor lost was manhood lost. Because honor was such a central aspect of a man’s masculine identity, men would go to great lengths to win honor and prevent its loss.

If we take even a cursory look at history, honor pops up over and over again as a central theme in literature and life. The epic poems of Homer are primarily about honor and man’s quest to achieve and maintain it. If you read Shakespeare’s plays with a close eye, you’ll find that honor and manhood take center stage as reoccurring themes. During the 17th and all the way into the early 20th century, upperclass men in Europe and the United States regularly engaged in duels on “fields of honor” to defend their manhood. When signing the Declaration of Independence, the American Founding Fathers “mutually pledged to each other our lives, our fortunes, and our sacred honor.”

But what exactly is honor?

We throw the word around quite a bit in our modern lexicon and give it a lot of lip service, but if you were to ask someone, “What is honor?” you’ll likely be answered with furrowed brows and head scratches. We think we know what it is, but often find it difficult to articulate when pressed. If you’re lucky enough to get an answer out of someone, they’ll likely say that honor means being true to a set of personal ideals, or being a man of integrity.

Honor=integrity is the point to which the definition of honor has evolved and what it generally means in our society today. Honor as I understand it is defined in a book called, The Art of Manliness Manvotionals.

That definition of honor, while correct in our modern use of the word, doesn’t really capture the concept of honor that Homer wrote about, that countless duelists died for, and that our Founding Fathers swore upon. Except for a few pockets of society like the military, fire departments, and criminal gangs, honor, as millions of men from the past understood it, barely exists in the modern West. When folks in the mainstream do bring up this type of honor, it’s usually done in jest. (See Man Code or Bro Code).

And while there are certainly some very troubling aspects of honor as it was understood in the past , I believe that part of the decline of manhood in America and other Western countries can be traced in part to a lack of a positive notion and healthy appreciation of the kind of classic honor that compelled (and checked) our manly ancestors.

Question: “What does the Bible say about honor?”

Answer:As a noun,honor in the Bible means “esteem, value, or great respect.” To honor someone is to value him highly or bestow value upon him. The Bible exhorts us to express honor and esteem toward certain people: our parents, the aged, and those in authority (Ephesians 6:2;Leviticus 19:32;Romans 13:1). But we must understand that all authority and honor belong to God alone (1 Chronicles 29:11;1 Timothy 1:17;Revelation 5:13). Though He can delegate His authority to others, it still belongs to Him (Ephesians 4:11-12).

Peter tells us to “honor all people, love the brotherhood, fear God, honor the king” (1 Peter 2:17). The idea of honoring others, especially those in authority (the king), comes from the fact that they represent God’s ultimate authority. A classic example is the command to “submit to the governing authorities because they have been established by God” (Romans 13:1-6). Therefore, “he who rebels against the authority is rebelling against what God has instituted, and those who do so will bring judgment on themselves” (Romans 13:2). This means it is incumbent upon Christians to honor those whom God has placed over us through our obedience and demonstration of respect. To do otherwise is to dishonor God.

The Bible speaks of another noteworthy group of people who are deserving of “double honor,” the leadership of the church, called elders: “Let the elders who rule well be considered worthy of double honor, especially those who labor in preaching and teaching” (1 Timothy 5:17). In the first-century church, some elders labored in word and doctrine by devoting their time to preaching and teaching, while others did so privately. However, all elders gave attention to the interests of the church and the welfare of its members. These men were entitled to double honor of both respect and deference for their position, as well as material or monetary support. This was especially significant because the New Testament was not yet available.

The Bible also gives us the command to honor one another in our employer/employee relationships (1 Timothy 3:17;6:1;Ephesians 6:5-9), as well as in the marriage relationship with the husband and wife being in submission to and honoring one another (Hebrews 13:4;Ephesians 5:23-33). Interestingly enough, of all the commands to honor one another, the most oft-repeated pertains to that of honoring one’s father and mother (Exodus 20:12;Matthew 15:4). This command was so important to God that if anyone cursed or struck his parent, he was to be put to death (Exodus 21:7).

The wordloveis also sometimes synonymous for honor. Paul commands us to “be devoted to one another in brotherly love. Honor one another above yourselves” (Romans 12:10). Honoring others, however, goes against our natural instinct, which is to honor and value ourselves. It is only by being imbued with humility by the power of the Holy Spirit that we can esteem and honor our fellow man more than ourselves (Romans 12:3;Philippians 2:3).

The book of Proverbs illustrates the association of a one’s behavior with its resulting honor. For example, “He who pursues righteousness and love finds life, prosperity and honor” (Proverbs 21:21; see alsoProverbs 22:4;29:23). Often, honor is conferred upon those of wisdom and intelligence, thereby earning praise and adoration (1 Kings 10:6-7). Another kind of honor pertains to those who have great wealth or fame (Joshua 6:27). Correspondingly, we also know that such worldly honor, fame and wealth, in the end, is meaningless and short-lived (Ecclesiastes 1:14;James 4:14).

Honor as taught in the Scriptures is far different from the type of honor sought after by the world. Honor and awards are heaped upon those with wealth, political clout, worldly power, and celebrity status. Those who thrive on this world’s fleeting honor and stature are unmindful that “God opposes the proud but gives grace to the humble” (1 Peter 5:5; see alsoProverbs 16:5;Isaiah 13:11). Such were the Pharisees of Jesus’ time, who sought honor and accolades from men. But in truth, Jesus rejected them. He said, “Everything they do is done for men to see” (Matthew 23:5). He not only labeled them as hypocrites, but “snakes” and “vipers,” essentially condemning them to hell (Matthew 23:29-33).

The point to be made here is that the world in which we reside is corrupt (Deuteronomy 32:5;Philippians 2:15) because it does not give to God the honor He deserves. The one who honors the world and the things of it makes himself an enemy of God (James 4:4). The apostle Paul wrote, “For even though they knew God, they did not honor Him as God or give thanks, but they became futile in their speculations, and their foolish heart was darkened” (Romans 1:21). The Bible teaches that honor is found in God and His Son and in our being like Him (John 15:8). We are to give obeisance to Him through the fruits of our labors (Proverbs 3:9;1 Corinthians 10:31), as well as through the care and nurture of our bodies (1 Corinthians 6:19). To esteem God as first in our lives (Matthew 22:37-38) is thereby expressed in both the total commitment of our lives and devotion of our possessions to His service and glory (Colossians 3:17). Though we are in this world, we are not of this world (John 15:18-21). This means, as we honor God through our godly character, we will reap dishonor from those of the world. In fact, the Bible teaches us that “everyone who wants to live a godly life in Christ Jesus will be persecuted” (2 Timothy 3:12).

After all is said and done, we do know this: as the heavens and all therein raise their voices in honor and praise to God, we are to do likewise: “You are worthy, our Lord and God, to receive glory and honor and power, for You created all things, and by Your will they were created and have their being” (Revelation 4:11). There has never been, nor will there ever be, anyone in any position of power or worldly influence who can claim such an honor (1 Timothy 6:16). God alone is the Creator and sustainer of all the heavens and the earth (Revelation 14:7).

All true believers are to honor God and His Son, Jesus Christ, through our acknowledgement and confession that He is the one and only God (Exodus 20:3;John 14:6;Romans 10:9). We are to honor God in our recognition that the gift of life eternal and the very salvation of our souls come through Jesus Christ and Him alone (John 11:25;Acts 4:12;1 Timothy 2:5). Knowing this, we give honor and obeisance to our Savior through our humble adoration and obedience to His will (John 14:23-24;1 John 2:6). As such, He will honor us when He seats us on His throne in heaven (Revelation 3:21).